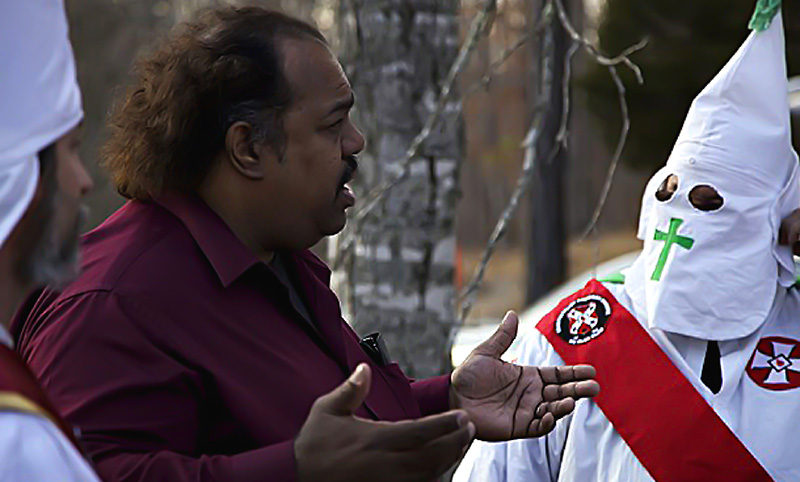 Daryl Davis wasn’t surprised when he saw White nationalists carrying tiki torches through the streets of Charlottesville, Virginia, on Aug. 11.

Davis, a Black musician and author, personally knew some of the people who were marching. He said the removal of a statue of Confederate Gen. Robert E. Lee, which supposedly spurred the protests, « had nothing to do with why they were there. »

« They were there for one reason and one reason only, » Davis said. « They were there to incite the first steps of a race war. »
Davis is an expert on White supremacists, specifically because he knows so many of them. He has spent nearly 30 years befriending members of the Ku Klux Klan, and convincing them to turn their backs on an organization the Southern Poverty Law Center calls « the most infamous — and oldest — of American hate groups. »

Davis, who said about 40 to 60 members have left the group directly because of the friendship they developed with him, also works with Scott Shepherd, a reformed former grand dragon for the Invisible Empire: Knights of the Ku Klux Klan in Tennessee. In his work, Davis sheds light on White supremacist organizations and those who join them.

Despite their efforts, Davis and Shepherd say White supremacist groups are using the rhetoric of President Donald Trump and his administration as a foothold to further their agenda, all while trying to legitimize racism in the public eye.

« What you’re seeing are people coming out from under the rock, from under the carpet, » Davis said. « They’ve always been here, but now with the new administration in power they feel a little more emboldened to show themselves more. »

« Anytime you’re going to have a gathering on public property u2014 especially if it’s a protest, march or a rally, or maybe you’re going to sell lemonade and hot dogs u2014 you must have a permit. … You cannot go to the city and put down on the application, u2018I want to start a race war,’ » Davis said. « So, they put down that they are the descendants of their great, great, great ancestors who fought in the Confederacy, and they want to preserve the heritage of the Confederacy, and they want to protest the removal of the Robert E. Lee statue. »

If the march was actually about the statue and Confederate heritage, Davis said, they would have also invited Black and Jewish descendants of Confederate soldiers who also support preserving the statue of Robert E. Lee.

« Instead they excluded them, » Davis said. « And they chose to march through the University of Virginia campus with their tiki torches, and down the streets of Charlottesville shouting anti-Semitic and anti-Black epithets. »

Shepherd, who also worked as an organizer for David Duke’s National Association for the Advancement of White People, said he was « blown away » when he saw people marching in the streets unmasked and carrying tiki torches.

« It’s more of a dangerous thing now than it was when it was just the Klansmen in the robes and hoods, » Shepherd said. « They’ve reached the point where they feel like their views are accepted by a lot of people in this country. »

Like Davis, Shepherd said that White supremacy groups are trying to dilute their image in order to appear legitimate and accepted by the general population.

Their goal is to be viewed as « a civic group, » Shepherd said.

Trump’s response to the violence helped to normalize their image, Shepherd said. The president took too long to condemn the action, wasn’t specific and wasn’t harsh enough.

« And I think that was giving the green light to the White supremacist movement that they be able to do this more and more and get away with it, » Shepherd said.

Though Trump did later condemn the violence in harsher terms, Shepherd said, « It was a little bit too late. »

Shepherd said that Trump didn’t realize when he blamed both sides for the violence that the « good people and fine people that he was talking about » got mixed up in the crowd and started carrying Nazi flags and White supremacist paraphernalia.

« That’s where they stopped being fine people, » Shepherd said.

Despite efforts to mainstream their image, Shepherd said behind the scenes White supremacists are using racial slurs and support having Black people separated from White people or even sent back to Africa.

« In the background, they’re talking about race wars and arming themselves, » Shepherd said. « They’re really preparing for a violent confrontation. »

Shepherd said that the Klan is meticulous when it commits acts of terror. He said an inner circle plans and executes acts — violence, cross burnings or other violence. Those outside the inner circle don’t even know who they are, preventing law enforcement from penetrating to find the organizers. 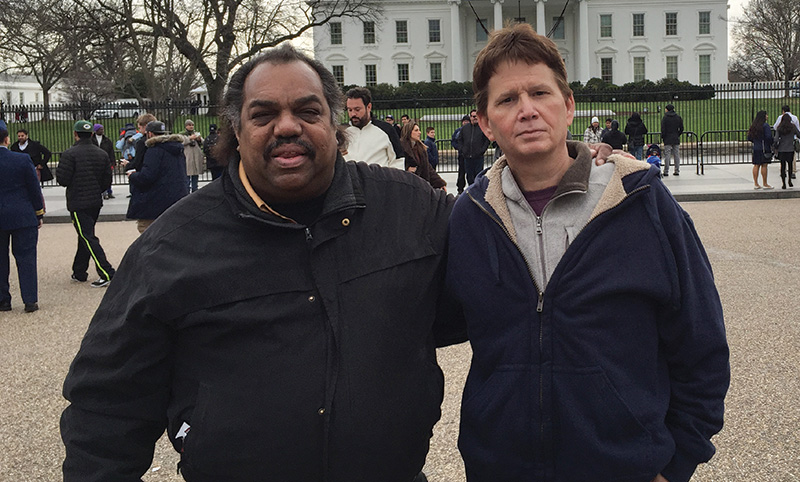 The Klan also promotes a lone-wolf system, where supremacists will commit acts of violence on their own, Shepherd said.

Shepherd said he remembers the 1981 murder of Michael Donald, a 19-year-old Black man who was murdered by two Klansmen, according to NPR.

The Southern Poverty Law Center later sued the United Klans of America on behalf of Donald’s mother. A $7 million judgment bankrupted the organization and forced it to close. At the time, Shepherd was a member.

Shepherd quit the White supremacy groups he was involved with in 1990 and said he takes « full responsibility » for everything he did.

Shepherd is unique among Davis’ friends in that he had already left his life as a White supremacist when they met. Most others have not.

Davis said he first became interested in meeting members of the Klan when he was 32. He wanted to know how people could hate someone they knew nothing about.

He started by having his secretary set up an interview with Roger Kelly, the grand dragon and eventual imperial wizard for the state of Maryland, Davis said. The secretary did not tell Kelly that he was meeting with a Black man.

Kelly and his bodyguard were stunned when they arrived at a hotel room for their meeting, Davis said.

« They were thinking either they got the wrong room number, knocked on the wrong door or [that] this was an ambush, » Davis said.

Eventually everyone began to relax when Davis said he heard a « strange noise. »

Davis said he jumped up from his chair and was ready to leap across the table and tackle Kelly and the bodyguard.

« I perceived it to be an ominous, threatening kind of noise, » Davis said.

When Davis jumped up from his seat, Kelly’s bodyguard reached for his gun, and the three of them stood there staring at each other, not sure exactly what had happened, Davis said.

It turned out the noise came from a soda can that had cascaded against melting ice inside a bucket in the hotel room, Davis said.

« We all began laughing at how ignorant we all were, » Davis said.

It was « a teaching moment, » Davis said. « Ignorance breeds fear. »

When the interview ended they agreed to stay in touch, Davis said.

« I began calling him and inviting him to my gigs, » Davis said. « And he would go, and he would bring his bodyguard. »

Then Davis said he started inviting him to his house, and over time Kelly started coming without his bodyguard.

After Kelly was promoted to imperial wizard, Davis said he started getting invited to his house to see Kelly’s « Klan den. »

« He began inviting me to Klan rallies, » Davis said. « So I’d go to these Klan rallies and watch them light up this big cross on fire and parade around [and] all that stuff. »

As their relationship grew, Davis said Kelly « realized that he’d been wrong, and he quit the Klan. »

Then, Davis said, he gave him his robe and hood.

Davis documented their relationship in his book « Klan-destine Relationships: A Black Man’s Odyssey in the Ku Klux Klan. »

From there Davis went on to meet other members of the Klan and make similar bonds, which culminated in his documentary, « An Accidental Courtesy, » in which Shepherd appeared.

Shepherd said he has been working to make amends for his actions.

In March 2013, the Klan was planning to hold a rally in Memphis, and Shepherd reached out to the imperial wizard who organized the event and asked him not to come, according to Fox19.

Shepherd said the Klan leader was not happy to hear from him.

« The voicemail was very angry, the language was like bathroom graffiti, » Shepherd told the station. « They blocked their numbers, so it’s a typical cowardly behavior to hide their numbers and hide behind their masks. »

Still, he warned residents not to attend.

He also speaks to classrooms about the dangers of the KKK and other groups.

« That’s basically what my mission is, » Shepherd said. « To try to prevent these young people from being sucked into that stuff. »

In January, Shepherd and Davis participated in a panel at the King Center in Atlanta, Georgia.

As he sat next to Martin Luther King Jr.’s youngest daughter, Bernice, Shepherd apologized for all of the terrible things he’d done.

« But there’s no excuse, I did it anyway, » Shepherd said. « And I extend my apology to everyone. »

King described his words as « redeeming. »

« What my father sacrificed his life for is what brought this possibility into being, » King said.

Davis said that at that moment, he realized his efforts were helping Dr. King’s dream come true.

« There we were on the red hills of Georgia, a former KKK leader who was all White supremacy and separating the races, sitting down at the table of brotherhood with the daughter of the man who died, giving his life dreaming to see these very people do just that, » Davis said. « It was indeed a very redeeming moment and I was very proud of everyone there. »

At the same time, he noted how « shameful it was that a Klansman could apologize to Black people, but the U.S. government will not apologize for slavery. »